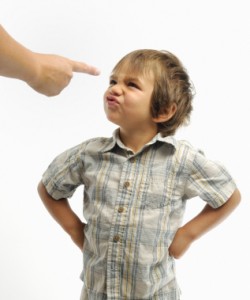 Today I had a very interesting incident with my almost 5 year old daughter.  I had sent her to go brush her teeth in my bathroom and she was in there for a few minutes and I heard her say “What is that smell in here?”  I thought maybe someone forgot to flush or something. When I went into the bathroom I caught my daughter sitting on the sink with a funny look on her face and then I was hit with the strong smell of tea tree oil.  Apparently she had opened the top to the small bottle I had on my shelf and spilled some.

I asked her if she had opened the bottle and she immediately said “NO” with wide eyes.  I of course KNEW she was lying to me, so I asked her again and told her to please tell me the truth.  I really thought that she would say yes and admit to it and then I would give her a quick reprimand about touching my things and then move on to putting everyone to bed.  Well, that was not the case.  She just kept saying “no” each time I asked her.  I then told her that she was going to be punished for lying to me and that she would not be able to have dessert after dinner tomorrow.  Dessert lately (since Halloween) has been 1 small piece of candy.  The kids look forward to this very much.  But she still did not budge.

I had to put my other kids to bed and I really felt like just letting it go and having her go to bed – after all I had punished her so should be ok to let it go.  But I felt very strongly about following through with the situation, so I told her to stay in the bathroom and wait for me while I put her brothers to bed.  She was crying when I went back into the bathroom.

I sat on the floor in front of her and asked her again “Are you lying to me?  Did you open my little bottle?”  She just stared at me and didn’t answer.  Then all of a sudden she blurted out that her little brother had done it.  I was pretty shocked because I already knew she was lying and now she lied AGAIN.  Isn’t it crazy how lying can actually cause blame and MORE lying?  This happens with adults too!  Gotta love the sin nature we have right?

Well, I went through the whole shpeal about how I knew she was lying and how it is very important to tell the truth to mommy.  I told her that there are consequences for lying.  I told her that if she just tells the truth that she would not be in as much trouble, etc, etc.  Then she quietly said “I’m scared”.  I suppose she thought she would get in a huge amount of trouble for spilling the bottle and thought lying would help her to NOT get in trouble.  I did more explaining and continued to ask her if she had opened the bottle.  I wanted to stay consistent and not give up and just put her to bed without her admitting that she was lying.  I thought that it was very important for her to come out and tell the truth to me.  I spoke to her as lovingly as I could throughout our conversation.

asked her one final time and she FINALLY shook her head yes that she had opened the bottle.  Tears welled up in her big brown eyes.  I told her that I was proud of her for telling the truth and I told her to come into my open arms for a hug.  She melted on me and cried.  I teared up as well and and asked her “what do you say to mama for lying?”  And she sheepishly said “I’m sorry”.  And I hugged her tight and told her that I forgave her and told her how much I loved her and reiterated the importance of always telling the truth.

I could’ve let the situation go and just punished her.  I often do that with little things that happen such as fights between the kids or bad attitudes.  I reprimand and punish and move on.  But there is just something about lying that I think is soooo important to really be consistent in following through and helping a child to admit they are wrong.  I did this with my oldest son a few years ago.  He is now 6 and he has not openly lied to me since then.  When I ask him to tell me the truth, he usually does the first time around.  He learned that lesson through me taking the time to sit down with him during the first major lying episode, and doing the same with my daughter will hopefully prove to be a valuable lesson for her as well.  I know some kids take more time to get things just because of their personalities, but the whole point is to be consistent with discipline and take the time out to talk to your child right away when things like this happen because it really pays off in the end.

How about you?  Have you dealt with lying with your child?  What did you do?