Between work, school and social activities, keeping a busy family healthy and active throughout the year can be a real challenge.  A well-balanced diet, exercise and good habits will go a long way toward helping a family meet this challenge, but seasonal illnesses may still afflict even the healthiest of people. 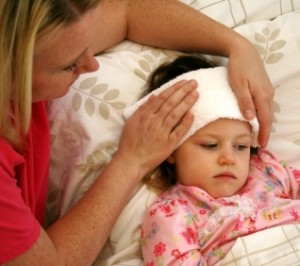 Most seasonal illnesses occur between the seasons, in the early spring or late autumn, when the changes in temperature and atmosphere make the body more vulnerable to infection. An exception to this is acute bronchitis, which most often occurs during the winter. Acute bronchitis causes inflammation of the bronchi; the medium and large sized airway passages in the lungs. The result of a virus, acute bronchitis symptoms include a severe cough, a great increase in sputum production and other symptoms that are characteristic of an upper respiratory infection.

Seasonal Influenza, commonly known as ‘the flu’, is an infection of the nose, throat and lungs by the influenza virus. There are many types of influenza virus, but the symptoms are generally the same, beginning with a high fever and including body aches, chills, headaches, nausea and vomiting. A dry, hacking cough, usually develops after about five days of illness and often remains for some weeks, even after the other symptoms have subsided.

A cough is a universal symptom of seasonal illnesses, in particular colds, flu and croup. Croup is most common among young children between the ages of three months and six years and features a barking cough accompanied by wheezing and difficulty breathing. Spasmodic croup is usually mild and caused by allergies or a bacterial infection, while viral croup comes with a fever and is more serious. Croup symptoms are often worse at night.

The ‘common cold’ may be caused by any one of hundreds of viruses, though the main symptoms always involve the nose. Nasal congestion and irritation, along with a low-grade fever, are the standard marks of a cold and the illness general runs its course after a week.

Nasal irritation may not always result from infection. During the spring, summer and early fall, when pollen levels are at their highest, inflammation of the nasal passages may be caused by allergic rhinitis or hay fever. When the body comes into contact with the irritant pollen, it results in an allergic reaction, causing sneezing and runny nose, a sore throat, primarily caused by the irritation of sneezing and post-nasal drip, head congestion and watery eyes. Hay fever can develop at any time in life, but most often begins in childhood after repeated exposure to the allergen; sensitivity may run in families.

Many vitamin and mineral supplements, such as Vitamin C and zinc, have been found to aid in preventing colds and flu, as well as speeding the healing process. Antihistamines, anti-inflammatories, such as ibuprofen and acetaminophen, and suppressant and expectorant cough syrups may also help with symptoms and promote healing. Vitamins, supplements and medications are all readily available; either in local stores or at discount prices online at Canadian Pharmacy.