My 3rd child, now almost 3 yrs old starting climbing out of his crib when he was around 18 months old.  He has always been a very active boy.  He is the type who will not stay put for too long so getting a toddler bed was out of the question.  I prefer to have my children stay in the crib as long as possible.  This helps them go to sleep better and nap longer.  But once they learn how to get out of their crib, that is when the chaos starts.

I decided to do some research online to find something that would help prevent him from climbing out of his crib.  I was THRILLED when I found the Cozy Crib Tent.

Here is a picture of the tent installed on my son’s crib: 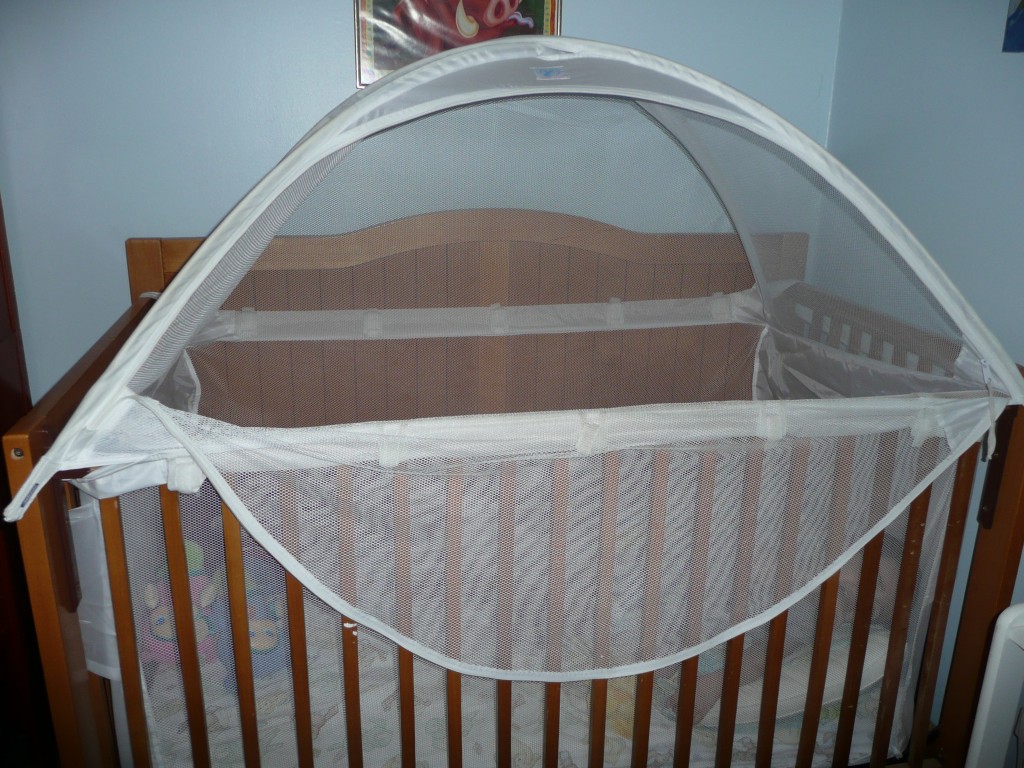 Here is my son in his crib getting ready for a nap: 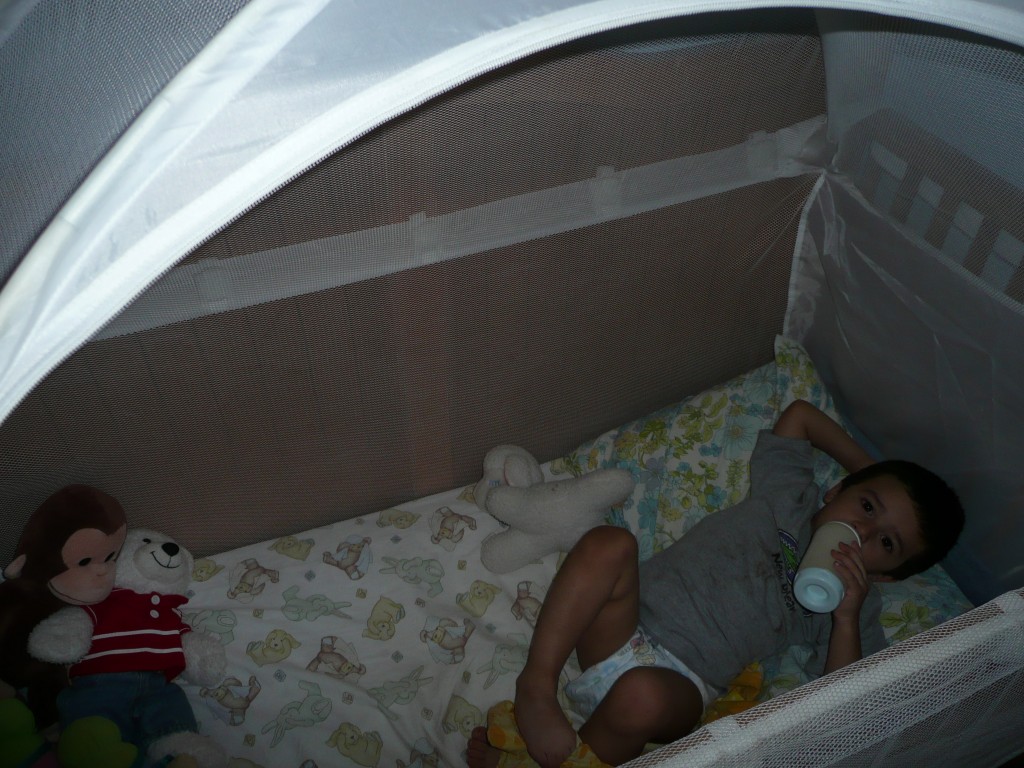 We started using the crib tent over a year ago now.  For the first 6 months the zipper worked to zip up the front of the tent, but it doesn’t work any longer.  But it doesn’t matter because my son will not climb out of the crib anymore anyway.

So, if you have a toddler who climbs out of their crib and you are not quite ready for a toddler bed, then definitely get the crib tent.  It is so worth it.  I no longer have to worry that my son is going to climb out of his crib in the middle of the night and walk out the front door.  LOL  And naptime is still going great.  I love that I can put him in the crib and even if he doesn’t go right to sleep, he can relax and stay put for a while.  Gives mama a nice break!

I bought mine on Amazon.  Here is a link:

My third child is almost 2 years old and he has already started the “terrible  two’s” stage.  For the past couple weeks (since school started) he has been out of control.  It may have something to do with the fact that he has lost his playmates during the day because my 2 older children are now in school full time.  But even when they are home, he still acts pretty bad.  He gets into EVERYTHING. 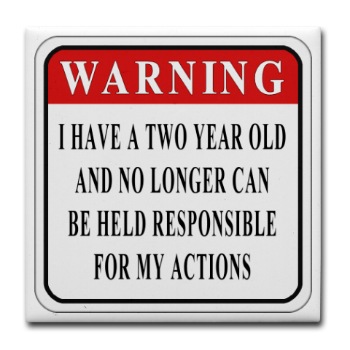 Over the past 2 days, he has done the following:

So, those are just a FEW things that I have been dealing with.  I’ll tell ya, my 2 older ones did not have much of a terrible 2 stage, so this was not expected at all.

Oh, and I forgot to mention how my son has been obsessed with taking ALL of his clothes off, including the diaper.  And did I mention that he likes to do this when he has a poopy diaper???  Yeah, you can imagine what that has been like.  LOL 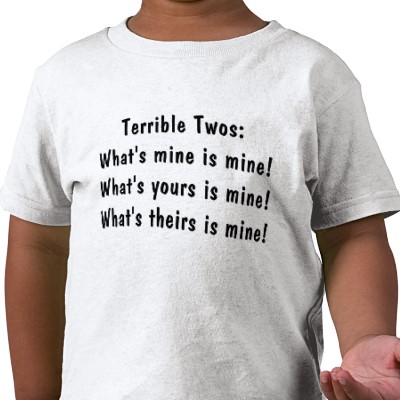 Well, you all know me and the fact that I like to google everything, so I decided to Google “How to Deal with the Terrible Twos”.  And wow, I found lots of great info! Here are some things we can do as parents to help them go through this normal stage in their lives.

Those are all excellent points and I do follow all of them, but I STILL have a child who is turning two and is acting pretty terrible.  So, what can I do when these things happen?

And how about you guys?  Do you have any tips or pointers that might help this exhausted mom deal with her Terrible (and Oh-So-Lovable) Two Year old?  Please comment! 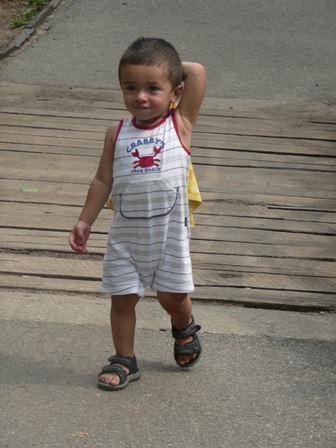 This is our middle child – #3 (we have 4 total).  He is a very active boy.  He is curious and very vocal as well.  The only thing is that he doesn’t say too many words yet and the words he does say don’t always make much sense.

“Nana” – which, to him, means anything edible

His main form of communication is pointing and making this “Godfather” grunting noise.   He sounds like an old man.  LOL

I constantly try to practice sounding out words with him, and he is really not interested.  Every once in a while he will repeat something, but it is immediately forgotten and he goes back to being a playful boy.

At our last pediatrician appointment, the doctor showed concern that he was not up to the level that children his age should be at with talking.  He should be saying 25 words, not 5.  But for some reason, I don’t feel this sense of urgency to get my child help right now.  Is this wrong?  I have heard of children not talking at all at his age, but my son is so vocal.  He has no trouble there.

I did speak with the principal at my oldest son’s school and she gave me the # for a speech therapist.  I am totally open to this, but I would really like to wait a few months to see if he progresses.  If he doesn’t progress, then I will definitely set up an appointment and get him checked out.

So, what is normal speech for a toddler?  I found this great quiz on www.speechforkids.com

If you have checked “No” for one or more of the items above, your child may be at risk for language, learning or reading problems later.

Here are some helpful resources that will help you determine if your child is in need of help with their speech development.

I will definitely keep you posted on how things go.  I am also open to any of your advice or suggestions as well.  Thanks so much!

My 1 yr old son is a very rough little boy.  He started walking at 12 months, much earlier than my other children who didn’t walk until they were around 15 months old.  My little “butter ball” (as we call him) is not only walking at 14 months, but running around like a mad man.   He is adorable, but there is one thing that can be quite annoying about him – HE SCREAMS.

He doesn’t throw fits or anything like that, he doesn’t cry and scream.  He just has out bursts where he screams when he wants something or when his brother or sister take a toy from him.  He screams when he is happy too.  I have not had to deal with this before, so I have no clue how to handle it.  We have tried to tell him “No Screaming”, but it seems like he is just too young to get it.  I mean he can’t talk yet, so maybe it is his way of expressing himself?  What do you think?

I could really use some insight on this one.  Any of you moms or dads out there have any advice?  How can I get my son to STOP the SCREAMING?

And don’t forget about the giveaway that I am currently doing!

Only a few have signed up, so there is a good chance you might win an autographed copy of the inspirational little book of quotes and short stories by 10 year olds and 100 year olds.  It is called “What I Know”.