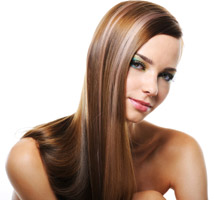 At some point, most little girls start to want to experiment with their hair. It might be learning how to plait a perfect fishtail braid, having fun with wash out glitter sprays, or just wearing it in a different style every day for a week – the desire to experiment is a natural thing. Whilst it’s all fun and games for little ones, such transformations can be uniquely stressful for a parent – especially if the little one in question has their mind set on doing something a little too grown up. It’s not unusual for young girls to ask for hair dye – every day, they’re exposed to a thousand different images that work to manipulate and mould their notions of beauty.

With the glut of glossy hair commercials currently clogging up the tube, it’s almost inevitable for a daughter to want to experiment with expensive hair dyes at some point. It’s your job, as a parent, to explain why it’s something best left for when a girl is much older. It’s your job to stem the tide of tears, when you eventually have to put your foot down. Fortunately, the super clever guys and gals at Clip Hair have made the job a whole lot easier. With their range of pre-coloured clip in hair extensions, your daughter can experiment without the need for harsh chemical based dyes. Here are just a few of the reasons why clip in extensions should be the way forward for you and your child.

No More Nasty Chemicals – obviously, a responsible parent isn’t going to permit a child to use anything that might cause them harm. Whilst commercial hair dyes are safe if used properly, they can still cause a huge amount of damage to follicles and the scalp. Plus, the fumes aren’t particularly healthy and the effect is far too permanent for a young girl. With clip in extensions, none of these things need be a problem – they contain no harmful chemicals, they’re easy to apply and they can be removed in a matter of minutes. What’s more, clip in extensions come in a wide range of different styles and colours.

Easy To Apply – when it comes to ease of application, you simply can’t go wrong with clip in extensions. It should take around five minutes to apply one, or even several, separate pieces. It’s so easy to achieve – all that you’ve got to do is open up the plastic clip on each extension, match it up with the hairline and then snap it closed again. As these extensions clip right into the hair, they won’t ever damage the follicles or put too much weight on the scalp. They can be comfortably worn for forty eight hours – after this point, they should be removed and brushed to ensure longevity.

No Commitment – it’s a bad idea to allow young daughters to commit to anything, really. They might be absolutely sure that they’ll never change their mind about having neon pink hair, but it’s the job of a parent to know better. Of course, it’s difficult to explain exactly why such things are ill advised to a seven year old girl – it’s much easier and a lot more fun to be able to indulge such silly whims. With clip in hair extensions, you don’t have to worry about commitment – as soon as she’s bored with her new style, they can be removed almost instantly.

Author Bio: Jean Mendoza has been a hairstylist for five years. She recommends Clip Hair for a wide range of affordable and reliable clip in hair extensions. As a mother of two young girls, she believes that self expression is an essential part of childhood and growing up – even if it means sitting at the dinner table with yellow hair and a glittery cat suit.